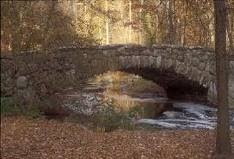 Rock Creek Park when taken as a whole certainly warrants no consideration under the "off the beaten path" moniker.  In fact areas of it can be subject to swarms of people - think National Zoo on a pleasant Sunday afternoon.  But certain trails - the very best ones in fact are seldom used.   I've covered a lot of them but my favorite has to be the Teddy Roosevelt side trail.  The views along this portion of the park are among Washington’s best-kept secrets, seldom appreciated by tourists.

When I take this trail I'm always reminded of President Roosevelt and his frequent outings to the Park. When he first became president he was a vigorous 42 year old, an advocate of "the strenuous life" fond of chopping down trees on the outskirts of Washington and swimming across the Potomac. The press had a field day covering his athletic outings. Roosevelt was particularly fond of what he called "scrambles," exhausting cross-country hikes. His favorite place in Washington for these expeditions was Rock Creek Park, where he led members of his "Tennis Cabinet" and various hapless foreign diplomats on grueling hikes. His motto was "Over, Under or Through – But Never Around."


My favorite story involved the French Ambassador Msr. Jusserand, who like Roosevelt was an avid birdwatcher. The natty Jusserand gamely followed T.R. on many excursions, writing of one occasion when they forded a creek, "I, too, for the honor of France removed my apparel, everything except my lavender kid gloves. The President cast an inquiring look at this as if they, too, must come off, but I quickly forestalled any remark by saying, ‘With your permission, Mr. President, I will keep these on; otherwise it would be embarrassing if we should meet ladies.’" 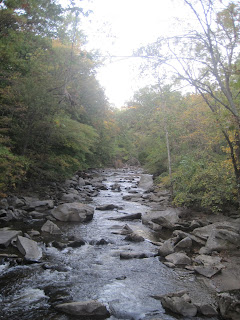 To get the trail head, head north on Beach Drive until it merges with Broad Branch Road, take an immediate left and park in the lot which accommodates about 20 cars (about 100 yards due north of Pierce Mill).  Exit the lot, take a right, cross over the bridge on Beach Drive and bear left - you'll see the sign for the Teddy Roosevelt trail here.  The trail ascends slowly but steadily and has some precarious footing but it gets interesting as you rise above Beach Drive - mercifully closed to traffic on weekends.  At about a quarter mile you'll reach the top of Pulpit Rock.  Take a moment here to appreciate the view and solitude.  If you scramble down to the flat boulders adjacent the jutting pulpit, you'll find a perfectly secluded perch.  It was obviously a favorite spot of the Blagden family - the boys of which carved their names in the stone around 150 years ago when the mill was active and the family lived on site.   The Blagden Mill was directly across the creek from Pulpit Rock in the 19th Century.  When you decide to move on, you can explore the ridge a bit which is covered in mountain laurel or descend back down towards the creek heading north. The descent is quick and soon you'll be on the east bank of the creek scrambling over rather rough rocky terrain.  Continue around the bend and you'll see Boulder Bridge.  This historic bridge is one of the most important in Washington for a number of reasons.  Boulder Bridge was constructed in 1902 and carries Beach Drive across Rock Creek.  The reinforced concrete arch bridge was designed by architect W. J. Douglas and was built at a cost of $17,636.  The real story here was the man who made this sort of architectural folly possible - Josef Melan an Austrian engineer. He is regarded as one of the most important pioneers of reinforced concrete bridge-building at the end of the 19th century and is credited as the inventor of the Melan System, a method for the construction of reinforced bridges.  This system was unique  because Melan did not build iron bars into the reinforced concrete bridge structure, but used rigid truss arches made of iron.  At this point you can continue north on the Valley Trail or swing left and head back to the parking via the Western Ridge trail.
Other areas of note in Rock Creek -
•Bridge Architecture: Even a casual observer is awed by the massive concrete bridges crossing Rock Creek. The Connectict Avenue bridge is the largest and the Dunbarton the most elegant, with it's elegant curves and terra cotta indian heads adorning the sides.

Getting to Rock Creek - The following take the visitor to the Nature Center which is great starting point for a wider variety of trails - all of which offer seculsion in the bustling metropolis.

Take Route 66 across the Teddy Roosevelt Bridge. Get in the right lane on the bridge, and take the ramp for Independence Avenue. Turn right at the bottom of the ramp (heading towards the Kennedy Center along the river; this is Ohio Drive, but it's not marked as such). After passing the Kennedy Center (under its terrace) and Watergate, continue straight onto Rock Creek Parkway. When the parkway ends (near Connecticut and Calvert), continue north on Beach Drive. You will pass the zoo and Pierce Mill. Continue on Beach Drive until you see a sign for the Nature Center; bear left here (onto Glover Road), as the sign instructs. (*On weekends there will be a gate across Beach Drive, so you will be unable to go to the right!) Follow the signs to the Nature Center. Via the Beltway or Maryland: Take the Beltway north into Maryland; exit at Connecticut Ave. and proceed southbound toward Chevy Chase. About 7-8 blocks south of Chevy Chase Circle, turn left onto Military Road. Go a little over a mile, and you will see a big brown sign that says "ROCK CREEK PARK-NATURE CENTER..."etc. Take the next right (at the traffic light), as the sign instructs, and follow subsequent signs to the Nature Center.

Via the Chain Bridge (VA):

At the end of the bridge, turn right onto Canal Road. Make the first left (at the light) onto Arizona Avenue. Proceed on Arizona until you come to a "T" intersection; make a right turn there onto Nebraska Ave. (The signs there may say "Loughboro Rd.," but it runs into Nebraska.) Proceed on Nebraska past American University, around Ward Circle, and across Wisconsin and Connecticut Avenues. Get into the right lane and turn right onto Military Road; less than 1/2 mile after you cross Connecticut. After a little less than a mile, you will see a big brown sign that says "ROCK CREEK PARK-NATURE CENTER..."etc. Take the next right (at the traffic light), as the sign instructs, and follow subsequent signs to the Nature Center.

Proceed Northeast on New Hampshire Avenue for approximately half a mile when it will intersect 16th Street. Head north on 16th Street, towards the Maryland border. About 3 1/4 miles up the road, it will intersect Military Road, after Madison and Nicholson Streets. Take the right hand exit onto Military Road west (cloverleaf ramp). Cross Military Bridge and then it will turn into a small parkway. Get in the left-hand lane. Make a left at the first light that you come to, at Glover and Oregon Roads. You are now on Glover Road and can follow the signs to the Nature Center.

The Friendship Heights or Fort Totton Metro are the closest to the Nature Center. Take the E-2, E-3 bus (from either Metro stop) to the intersection of Glover & Military Rd. Get off, look to your left and follow the trail up to the Nature Center. The Van Ness Station is the closest metro stop to Peirce Mill, but it is still about a mile away. From Van Ness, walk south on Connecticut Avenue to Tilden Street and make a left. Follow Tilden to the bottom of the hill and the mill is on your left. Foggy Bottom is the closest metro stop to the Old Stone House, from there walk north to Washington Circle and take Pennsylvania Ave. west M street and continue west along M Street to the Old Stone House, about a 1/2 mile.